Covering 16 countries and 3,174 miles (5,109 kms) in a little over 89 hours, the challenge was designed to show how easy it is to cover huge distances in a short time using a standard EV and existing charging infrastructure. The adventure started as the team were waved off from Kia's Norwegian headquarters in Oslo, with Kia Portugal in Lisbon welcoming the travellers at journey's end.

The team improved on the time set by racing legend Sir Stirling Moss, who undertook the drive in 1952, by 47 minutes. This is understood to be the first time the route has been attempted in a fully electric vehicle. Having completed the epic 3,174-mile adventure, the team arrived in Lisbon to mark World EV Day on September 9th.

Using the Kia EV6 Air's impressive range and 800V rapid-charging technology to maximum effect, the team also relied on 'Kia Charge' to cut the journey time. Allowing easy recharging, the 'Kia Charge' service lets EV owners access more than 400,000 public chargers across Europe from a single account with a single RFID card. This provided the team with rapid charging locations along its route, enabling them to get back on the road as quickly as possible after each stop. The EV6's rapid charging technology was critical to the team's recorded time.

Speaking of the challenge, Project Leader Mac Mackenney said: "This wasn't about trying to beat Sir Stirling, but demonstrate that mammoth trans-continental drives in an EV can easily be undertaken here and now in 2022. Many people still view EVs as ineffective or unable to cope as a daily means of transport outside of city life, but the Kia EV6, and the charging network show that just isn't true."

We'd like to thank Kia UK, as well as Kia Norway and Kia Portugal, for their support and hospitality, and want to recognise the enthusiasm and kindness we've experienced on the road as we've travelled from the top of Europe to the bottom."

Originally intending to cover 15 countries in 120 hours, the team were able to shave more than a day and add an extra stop to their itinerary after it became clear just how quickly they could cover the distance. Only stopping to charge and change drivers, the team operated in shifts and adhered to the speed limits of each country visited.

Despite recording the journey, the drive wasn't about setting the fastest time possible, and the team made detours to honour Sir Stirling along the way. This included the 7,500-foot high Julier Pass in the Swiss Alps, part of the original 1952 route, and Monaco, which allowed the team to drive the historic Grand Prix circuit.

In addition to the support of Kia UK, and the generous loan of an EV6 'Air' for the challenge, project partner Kumho Tyre (UK) supplied the ECSTA PS71 EV tyre that is original fit on the challenge car and used throughout the trial. Partner DFDS provided ferry crossings to France and then again to the start point in Oslo to ensure that the team were as rested as possible ahead of the marathon drive. Keeping everyone fed and nourished, the AMG Group supplied Wayfarer expedition rations to ensure team meals were quick and fuss free.

Leaving Oslo, the team set a course for the border with Sweden. From there it was destination Denmark before driving through Germany, the Netherlands, Belgium, Luxembourg, France, Switzerland, Liechtenstein, Austria, Italy, Slovenia, Monaco, Spain and finally Portugal.

The team departed on Sunday, 5th September at 15:00 and crossed the border into Portugal, at Vilar Formoso on Thursday, 8th September at 08:12. This marked the start and stop point for the timing - as per the original drive in 1952.

The entire trip was tracked by project partner YB Tracking, and the route trace is available at https://yb.tl/evmarathon 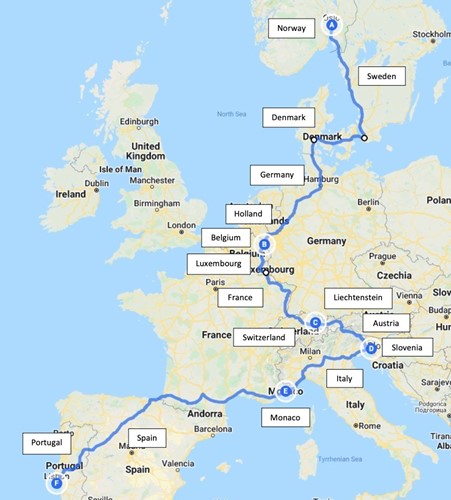 The 'Driven to Extremes Euro EV Marathon' was inspired by the adventure undertaken by Stirling Moss in 1952. A publicity stunt to promote the then-new Humber Super Snipe 4-door saloon, the legendary racing driver, along with three of his 'fast friends', visited 15 European countries in less than five days.

2022's challenge gives that journey a modern perspective, and concluded on World EV Day, September 9th. Traveling from Oslo to Lisbon, driving roughly 200-mile legs at a time, and using Europe's public charging network throughout, the challenge used one of the most accomplished electric vehicles available today.

With a WLTP combined range of up to 328 miles on a single charge, the Kia EV6 'Air' was the perfect car for the Driven To Extremes team to tackle the 3,174-mile marathon. With its spacious cabin and long wheelbase, the car provided comfort during this 89-hour drive, while its 800V ultra-rapid charging technology kept pit stops to a minimum. Capable of taking the battery from 10 to 80 per cent in just 18 minutes when using a 350kW charger, or from 10 to 80 per cent in 1 hour 13 minutes using a 50kW charger, the Kia EV6 allowed the team to pick optimal stopping points along the way.

To ensure the team had the best possible chance of completing the challenge in time it also used 'Kia Charge'. Providing easy access to chargers across all parts of the UK, Northern Ireland and Europe, 'Kia Charge' lets owners choose from 23 charge point operators in the UK via a single account, and dozens more across Europe. 'Kia Charge' provides instant access to more than 21,000 connectors across the UK - equivalent to approximately 70% of the national public infrastructure - and more than 400,000 across 29 European countries, all from a single account.

From its departure point at Kia's Norwegian headquarters in Lørenskog on the outskirts of Oslo, the team of drivers used main roads and bridges to cover the 3,174 miles and the adventure was tracked at all times by a GPS system. The route trace is available via partner YB Tracking: https://yb.tl/evmarathon. The team of three took turns behind the wheel of the EV6, driving, resting and navigating - with stops made for driver swaps, team rest and vehicle charging. A support vehicle, also supplied by Kia, accompanied the EV6 to document the drive, carrying a photography and film crew.

To interview project leader Mac Mackenney about the Euro EV Marathon, please use the media contact details below.

About Max Adventure
The Max Adventure team are no strangers to motoring challenges. Having held the 96 & 131 counties, Cape to Cape and London to Cape Town records, it's driven to far-eastern Siberia in builder's vans; over the Himalayas with classic cars; swam amphibious vehicles in the Bering Strait with Sir Ranulph Fiennes; crossed the Sahara with injured military veterans and driven the coldest, hottest and toughest roads on the planet with Hollywood actors Tom Hardy, Henry Cavill and Adrien Brody for an award-winning 'Driven to Extremes' TV series on Discovery Channel.

Max Adventure has a strong track record of working with vehicle manufacturers as well as OEMs, oil and tyre companies, equipment and lifestyle brands, and the team is led by its founder Mac Mackenney FRGS.

Images are courtesy of Josh Raper Media - www.joshrapermedia.co.uk and are available for editorial use, but copywrite remains with the author. 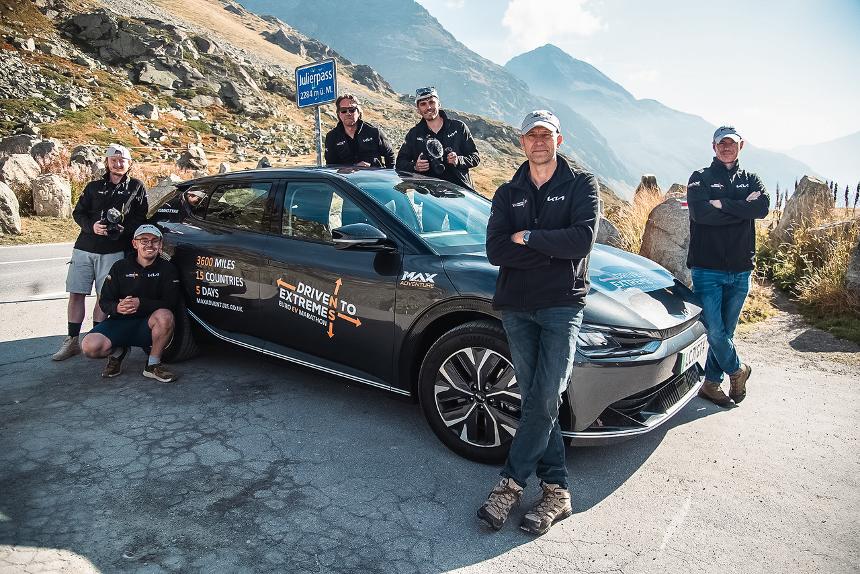